Skip to content
Your Leader In Commercial Refrigeration Installation and Repair

Walk into almost any establishment today, and you will likely see draft beer being served.  It is so common we do not think about what it means to install, service, and operate a draft beer system.

What is a draft beer system exactly? What is a draught beer system? These are questions we frequently answer because people have some idea, but don’t fully know the complexity of a system.  Therefore, having a better understanding of the equipment and process will allow prospects and customers to make better decisions when specifying a draft beer system.  This will typically lower costs, because the client can better schedule time and resources by having more information during an installation.  Additionally, the process may run smoother as the customer is more informed.

We don’t often think of the complexity behind the wall required to serve the perfect pour every time. So, this article will give a brief overview of the major components that make up a draft beer system or a draught beer system, and how they work together.

The Three Major Sub-Systems in Most Beer Systems

There are three sub-systems which are common to most draft beer systems.  These include the gas required to dispense the beer, the beer itself, and the cooling options needed to maintain the correct temperature for storage and consumption.

There are several types of gas and delivery options, but gas usually serves two purposes.

Gasses are food grade and highly regulated for purity and consistency because they come into direct contact with the beer during storage and consumption.

CO2 is the most common gas and is often used alone or in combination with other gasses.  Additionally, CO2 is often blended based on the system architecture or type of beer being served.

The most common blend gas is nitrogen (N₂). Nitrogen is commonly mixed with CO2 and is always show second when combined with CO2 as a blend gas.

Blend gasses are manufactured locally on-site, or delivered to a facility pre-blended.  The formulations vary widely and can be almost limitless. The product being served also determines the blend ratio.

Compressed air should never be specified when installing a beer system.  It introduces impurities and moisture to the beer. Therefore, it will ruin the flavor and spoil the beer.

Most draft beer moves from the keg to the glass through tubing. Gas powers the movement of the beer from the keg to the faucet through a series of tubing.  Flexible tubing is specified today due to its ease of installation and labeling. Stainless steel is also an option in some applications. 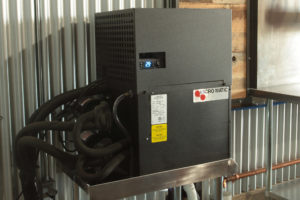 The MicroMatic Pro-Line Glycol Power Pack showing the 29-degree temperature they system is able to maintain. This workhorse unit can support trunk lines of 250 feet and is a dual motor dual pump unit supporting 40 taps.

For beer dispensed close by (direct draw beer system), that may be the only requirement. A delivery location farther away (long draw beer system), requires cooling the delivery lines to maintain the optimal temperature of the beer. This keeps beer cool all the way to the glass.

If there is a difference in temperature from keg to faucet, problems with dispensing such as foaming may occur.

Beer should be between 34 and 38 degrees Fahrenheit  from the keg to the glass. Temporary installations may use ice while permanent installations typically require a refrigeration system to maintain the proper temperature.

For small temporary installations, self-contained cooling may only consist of an ice/water bath in a large trash can.  Locally mounting a compressor and condenser is more typical in permanent installations. This compressor/condenser combination may be unique to the beer system or shared among multiple disciplines such as using a walk-in cooler to store beer and food products.

The two types of cooling types include air and water.  Each offers distinct benefits.

A keg is a pressurized container holding a specific amount of beer. Most kegs are made of stainless steel or aluminum. Plastic and rubberized containers are also becoming more popular in the industry depending on size.

All kegs are pressurized. “Tapping a keg” refers to attaching a connector to the keg neck and applying some form of gas to the keg, on top of the beer, to push it down and out the pickup at the bottom of the keg. The beer flows up the internal tube inside the keg and exits through the same keg neck connection.

Five common keg sizes are range from approximately five to 15 gallons.  Weight per keg can be from 58 to 160 pounds when full. Keg sizes also are rated in the number of 12oz. glasses of beer they hold.

The coupler is the physical connector that “taps” the keg.  It allows gas to flow into the keg and beer to flow out of the keg. There are several different types of couplers available. Therefore, your installer can specify the correct one for the beer you plan to serve.

The most common connector type from US Distributors is the “Sankey D Coupler”.  Additionally, specialty and craft breweries may specify alternatives.

There are also several safety features to keep the gas flow going into the keg and beer exiting the keg. One-way valves maintain the flow going in the correct direction. Check valves prevent gas or beer from flowing freely once the connector is disconnected. Additionally, a pressure relief valve on each connector acts as a safety to keep the pressure inside the keg from building up to unsafe levels.

The beer line is the medium beer travels through from keg to faucet.  Options range from vinyl and barrier tubing to stainless steel. Depending on the application and the length the beer travels from keg to glass determines the type of beer line specified. Vinyl beer line is inexpensive, flexible, and the most common. Installers use barrier tubing where the distance from keg to the faucet is longer. If the keg to tap distance is relatively short, then stainless steel is specified due to its added expense. Draft beer systems incorporate one or all of the different beer line tubing types in a single installation based on requirements.

Beer faucets are the customer-facing portion of the beer system. We commonly refer to them as “beer taps.” The faucets come in several designs with pros and cons depending on the type of beer dispensed. They typically have a tall handle with the name of the beer prominently displayed on each tap. 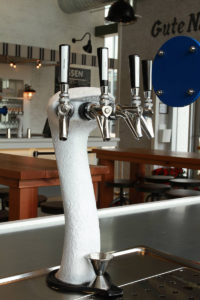 There are standard and European faucets in several configurations. Front sealing, rear sealing, vented and ventless faucets are also available with and without flow control. Some faucets are specifically designed to pour nitrogenated beers or stouts. Also, there are faucets to cream the beer (add bubbles) to achieve the proper texture for the beer.

Additionally, there are several faucets, which can dispense products other than beer such as wine, whiskey, coffee and other beverages.

Multiple parts and pieces make up faucets to achieve the desired result. Therefore, the pro’s and con’s of each faucet design must be weighed against the desired result to obtain the proper pour before the faucet is specified.

NOTE:  Never use compressed air as a gas source for beverages due to oxygen spoiling anything it contacts, and contaminants pushed into the product.

To dispense beer there needs to be some way to push it out of the keg, through the beer line and faucet, and into the glass. Beer systems use gas for this purpose. The gas source is either carbon dioxide or a carbon dioxide nitrogen mix.  Both types of gas are oxygen free.

Additionally, this gas is beverage grade and meets stringent requirements to achieve the purity of the beverage grade label. Food grade gas keeps from imparting impurities, spoiling the beer, or altering the flavoring the beer.  Purity is also required to keep from ruining the beer.

Retailers purchase beverage-grade gas canisters directly and change them out as they become empty. For higher volume operations, gas is dispensed and refilled from a holding tank (Dewar) installed on location.

The gas source can power both soda and other beverages along with beer. 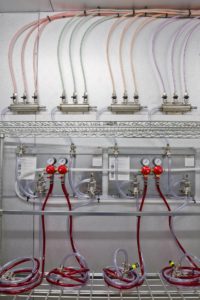 Many regulators incorporate shut off valves to stop the flow of gas without adjusting the regulator. Regulators now come equipped with safety relief valves to prevent unacceptable gas pressure build up.

There are three types of pressure in draft beer systems:

Each component of a draft beer system connects using special connectors and tail pieces.  These connectors connect vinyl tubing to other beer system components.  They also connect different sizes of tubing together where needed. The connections are chrome plated, stainless steel where they contact with the beer.  This keeps the connectors from altering or adding a metallic flavor to the beer.

Stainless steel is inert and the recommended material for beer systems as it does not alter the flavor of beer.  Chrome plated connectors and tail pieces can lose their plating over time due to beer flow or the abrasiveness of cleaners used in the system.

You should take all these considerations into account when designing the proper draft beer system to provide your customers with the perfect pour of draft beer every time.